Scare in the Night

I heard about this incident when I was in Florida in January. It happened to someone I've known for years. I don't see them much anymore, but we still keep in touch.

They have a 30-year-old son who still lives at home. He had some learning disabilities growing up, but nevertheless managed to graduate from high school. He went to community college, took some photography courses, culinary courses, health classes. Meanwhile he worked on and off, mostly at restaurants.

Last year he started to exhibit some mental-health issues. At one point, he got into an argument with some other young men -- nothing physical, just verbal -- and he decided that these guys were coming after him for revenge. Whenever a car came down the street he would peer out the windows, wondering if someone was casing out the house.

At first his parents were wary, on the lookout. But nothing happened. There was nobody. So the parents tried to downplay the whole thing. But the son couldn't let it go and seemed to be getting more paranoid as time went on. He stayed at home more and more, afraid to go out, because he thought people were following him.

His parents arranged for him to get some therapy. He was prescribed some medications. He took them most of the time, but complained they made him sleepy and lethargic, so he occasionally skipped his doses.

Then one day, he woke up in the middle of the night. He thought he heard noises somewhere in the kitchen or living room. He convinced himself that someone had broken into the house. He panicked. He thought intruders had come to attack his family; but he was too afraid to go out of his room. Then he decided they were after him, going to kill him. So he decided to do it first.

He had some kind of knife in his room, and he started to cut himself on his arms. He bloodied himself but didn't do any major damage. Then he stopped. He smoked a cigarette in an attempt to calm himself down. 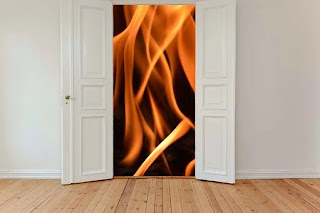 Next thing he knew, his mattress was smoking. Apparently, he had dropped his lit cigarette on the bed. And now it was on fire.

His dad woke up -- maybe from the noise his son was making, maybe from smelling the smoke. He got out of bed, quickly checked around the house. It was dark and empty. There were no intruders. Then he saw the smoke coming out of his son's room.

The dad got his son out, along with the rest of the family. He called 911. The fire department showed up in a few minutes. The fire was mostly contained in the son's bedroom, but between the fire damage, the smoke damage and the water damage, the house was a complete mess.

The family suffered some smoke inhalation, and some emotional trauma. But no one was burned; everyone's okay. But they had to find someplace else to stay for the time being, and wait for the insurance company to assess the damage and then begin the long process of repairing the house.

The son was sent to a mental-health facility where he spent a few weeks undergoing more intensive therapy. He understood what he had done, and was remorseful, but also knew that he couldn't always control himself.

Now he's back out, living not with his family but in an apartment in a home. He is still under the care of a psychologist, with more careful monitoring. The family is in the process of putting their lives back together, which has only been delayed by the Covid-19 epidemic. But the prognosis is good, for both the young man and the larger family.

Fortunately, there was no gun in the house. What do you suppose might have happened if there was?

Wow, that family has been through the wringer, and I hope the young man's treatment and new living situation are successful. I appreciate this post, but wonder about that last sentence. With an unstable person in the house, a gun can be safely kept and locked up. Just sayin'.

That is a horrific story, but it did have a good outcome. I do hope the young man will be all right. How hard it is for all of us at this time, but especially when you've got a situation like this. Thanks for the story, Tom. I too am glad he didn't have access to a gun.

Mental illness is a difficult thing to deal with. Glad no one died because of this.

Unfortunately this son will most likely continue to have serious problems. He cannot stay with his parents forever. A friend of mine had the same issue. When the adult child became threatening, as this son is, they found a group home for him. He does well there with people he can relate to. It is perhaps best to consider it now instead of spending the next twenty years in fear & then having to do it when the son is 50 and will not adapt well.
As for the suggestion that a locked up gun is safe, in this situation, I disagree. A 30 year old man will eventually figure out how to access that locked location. The parents will eventually accidentally allow him to gain knowledge of the location of the combination or key. They have to be stored somewhere.

You can't make assumptions on speculation. Are the parents gardeners? Do they do their own lawn care? That means they have fertilizer on the property. Will the son compose his own bomb? Do they parents store empty beer bottles? Gas and propane? Rags? Can the son construct a molotov cocktail bomb? Obviously the parents had knives and thus the son cut himself up. Should the parents take all the knives out of the home? Obviously the son created a fire from smoking a cigarette in bed. Was smoking banned in the home?

Not a very constructive question, IMHO. Just another indignant attempt to stifle guns.

I was so afraid where this story was heading. I think had there been a gun in the house that he mighty have accidentally killed his parents. I am so happy it had a much better ending though the fire was quite tragic. That the young man is getting help is a blessing.

Dear Tom and Friends, seems to be alot of that going around. Ya think the learning disabilities might have something to do with boys forced to sit in classrooms, and hearing the same old, we're-just-evolved-apes clap-trap? And also, being fed, non-stop, the girl-power bs. What about boy power? No wonder so many boys end up passive-aggressive, in their late 20s, still living with, and basically living off, their parents.

The answer to your concluding question is easy and simple. there would have been more trouble than a house burning. It sounds like this family has been trying very hard to hold things together.

My heart goes out to that family. I worked with disturbed young people for years, and can relate to the difficulties in managing the situation. The young man didn't wish to hurt others, but did have self-harming tendencies. It was fortunate that no gun was accessible.

Mental health is so tough.
Gun control is tough.
A friend had a kiddo who became an addict, then becomes sober with the addition of some horrid Mental and physical health issues. He , legally, bought several guns. The family spent several years pleading with officials To take away the guns. No luck. They could not do anything because his records were sealed. Privacy issues.
BTW - I have another friend who keeps a gun because their adopted adult son has attacked them a number of times. They own no bullets....
I don’t know the answer.

A very sad story. I know all too well what it is like to live with someone who is mentally ill. I hope everyone finds some peace from this kind of suffering.

Although a harrowing story, so glad it had a happy ending. Hope the young man continues to do well.

That's a tough situation, I hope that things improve for the family. It's also an interesting question at the end. I'm not sure there are many/any other developed countries where this question would be asked - isn't that telling?

you boomers turned America into a fascist police state and now the younger generation is rising up against YOUR FASCISM. Good luck getting us to pay taxes to support your retirement. I guess you boomer scumbags can go blow your brains out

That is so awful Tom, mental illness (sounds like he is paranoid schizophrenic) can be terrifying. I have friends whose sons have exhibited similar, two suicided in their early 30s as the voices in the head got too extreme. Heartbreaking for all concerned.

I am so glad he is in care, I don't believe there is a cure though the medication is extremely sedative which may result in patients abandoning it.

I've heard stories like that. One family had a son who was schizophrenic and tried to strangle his mom. He ended up in an institution. So many have been let out and if they aren't on medication can be dangerous. It's a sad situation.

Not an uncommon situation, unfortunately. And then there are the legions of families with a drug addict in their midst, whether in or out of the house. May they all find some kind of peace in their dilemma.

What a sad story! It must be so tough to have a kid like that. I worked at a school for troubled kids, and when the parents brought them for the interview, they all looked so EXHAUSTED. We are lucky if we and our kids just have the ordinary neuroses (a little depression, a little anxiety, a little ADHD) and not the crippling kind.

Oh gosh! This is so sad and traumatic. I worked for a mental health clinic in college and remember the sad lives of the patients.